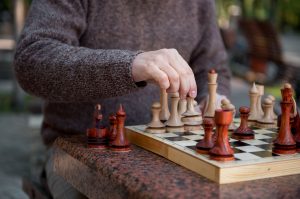 As we learn more about the causes of dementia, growing evidence of a healthy lifestyle is likely to reduce the risk of decline. Here are some of the ways to lower your risk of dementia:

Curcumin, found in the spice turmeric, can also help in improving memory and thinking abilities. Some researchers say curcumin users have less buildup of amyloid and tau in their brains – which are two proteins that are known as biomarkers of Alzheimer’s disease.

Cocoa flavanols (found in chocolate) have been linked to improved memory and thinking skills. Hershey’s powder has been found to have the highest levels of flavanols with the least contamination of heavy metals.

We hope you might consider jointing our walk team, Michael’s Marchers, at the Walk to End Alzheimer’s on October 13, 2018. It’s fun (you’ll be socially active which is helpful as indicated above) and you’ll get a little exercise (also helpful). Even if you don’t attend, help support the fight against Alzheimer’s by joining our team by clicking here.