05 Oct DON’T LOOK A GIFT HORSE IN THE MOUTH? GIFTING PROS AND CONS – CONSIDER BOTH TAX AND PUBLIC BENEFITS ISSUES 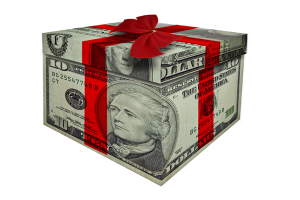 Although many realize you can make a tax-free gift of $15,000 per calendar year, per recipient without having to report the gift to the IRS, we often find that most are unaware of unintended adverse consequences that could result from that act of generosity since other issues should often be considered besides the gift tax issue. Many give away $15,000 per year, per person simply to reduce the size of their estate – particularly if they should have an estate that would otherwise be taxable on death (estate taxes). So, for example, if parents, each 60 years old, have adult children, the parents could give a total of $60,000 in a year (the father giving $15,000 to each child and the mother giving $15,000 to each child) without being subject to gift tax or reporting requirements. Most do not realize that if the gift exceeds $15,000 to an individual, it is the donor (in this case, the parents) not the donees (the children in this case) that are responsible for any gift tax and for reporting the gift to the IRS. So, if the father gave $115,000 to one child in year 2018, the father would be subject to the gift tax on the $100,000 excess over the annual exclusion amount of $15,000. However, the father could file a gift tax return using part of the unified lifetime exclusion which is presently $11,180,000 per individual donor (and that amount is scheduled to increase to $11,400,000 as of 1/1/19). This would reduce the amount that the donor could give at death. Those with taxable estates may look at the valuation of the asset given prior to making a gift.

Since most Americans have an estate less than $11,180,000 (double that amount is married), the excess gift would have no problem from either a gift or estate tax perspective. The gift is neither tax deductible and the recipient of the gift is not subject to income tax for receiving the gift.

Furthermore, a person can give away more than $15,000 to any donee (the recipient) if it is made directly to an educational institution (i.e., pay your grandchild’s tuition) or if it is made to a medical provider (i.e., pay your child’s hospital and doctor bills) in addition to the $15,000 gift per year to such donee.

This is a different than giving to a charity where there is no limit and where sometimes the donor gets a charitable tax deduction. It should be noted that beginning in year 2018 less Americans will be entitled to the charitable tax deduction since the standard deduction was doubled by the new tax law that became effective in 2018. As a result, for those who are charitable and over 70½ who have retirement accounts but do not need the income from the retirement account (which a minimum amount is required to be distributed annually, once they reach 70½) and the charitable deductible is less than the standard deduction, it is suggested the distribution (which normally would be subject to income taxation) be made directly to the charity as that would not result in income tax under current law (but there would be no charitable deduction). So, for example, if a 72-year-old with a retirement account normally tithed but his or her deductions were not greater than the standard income tax deduction, then he or she should consider the distribution be made directly to the charity so there would be no income tax on the distribution.

In addition to tax considerations, public benefits rules should also be taken into account before making a gift as there is a presumption that uncompensated transfers were purposefully done to reduce assets so that the government would help pay for care costs since programs such as Medicaid and certain Veterans programs are “means-tested”. So even though you make a $15,000 gift which may have no gift tax implication or reporting requirement, it could be a disqualifying event if you should apply for public benefits within the applicable “look-back” period. There are numerous Medicaid programs each with their own rules, but a common example would be long-term care Medicaid which has a five-year look-back period. So, if you made an uncompensated transfer (a transfer for less than fair market value) to a child (assuming the child is not disabled which is one of the exceptions under the Medicaid rules or the gift is not to an UTMA or to an ABLE account discussed in another article in this newsletter), it could be penalized requiring you to private pay instead of the government assisting in payments for long-term care. Similarly, as of October 18, 2018, the Veterans Administration will also penalize claimants who seek benefits if the transfer reduces assets below the maximum allowable limit (see our article this month) if made within a three year look-back period.

Thus, before making a gift, there are numerous considerations (ranging from various tax issues to public benefits issues) that the donor should be aware prior to making a gift.